All sizes of bands are available from solo or duo for receptions up to sixteen-piece, including Vocalists and Multi-Instrumentalists. 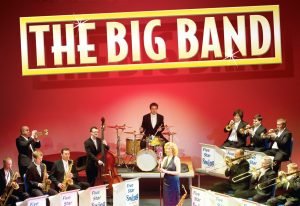 “The Ball was an overwhelming success!” Jill White, Mayor, Borough of Surrey Heath 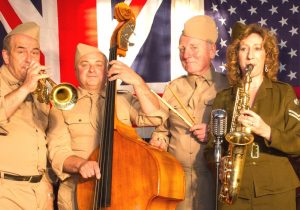 1940’s Five Star Swing was especially selected for the reunion party of the original TV cast of “Dad’s Army”, Churchill War Rooms, Westminster Palace, Imperial War Museum and H.M.The Treasury! The “G.I” musicians plus Simone as Vera Lynn will get you “IN THE MOOD” with the exciting vintage sounds of the 1940’s… sing-a-long with “We’ll Meet Again” & “The White Cliffs of Dover… 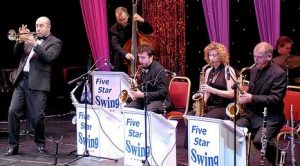 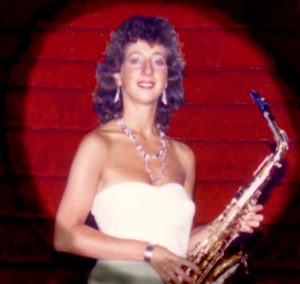 Five Star Swing was featured in the National theatre tour of TV’s “Military Wives” and “BUGLE BOY” – the Glenn Miller Musical Story! – Chris Says, “I’ve been brought up with this style of music, as my father, Chris Smith Snr’, played trombone for Frank Sinatra on his European tours and the famous Ted Heath Big Band – we recreate a great fun atmosphere with Five Star Swing, enjoyed by the band and all generations these days… I look forward to you making contact with me and discussing your event’s requirements”.


“You were all fantastic! We’ll be sure to find an occasion to book you again” – Lyndsey & Paul Wells, Wedding Day

“An excellent band, even better than I had remembered making Jessica’s Batmitzvah such a successful occasion!” Anne & Roger Mallack, Ilford, Essex

“Arrived over 70 but left a teenager again! – what more can I say, except thank you so much” – Doris Swift, Brentwood